Ontario: the Ultimate Guide to Crossing “Long-tario” on Your Canadian Road Trip 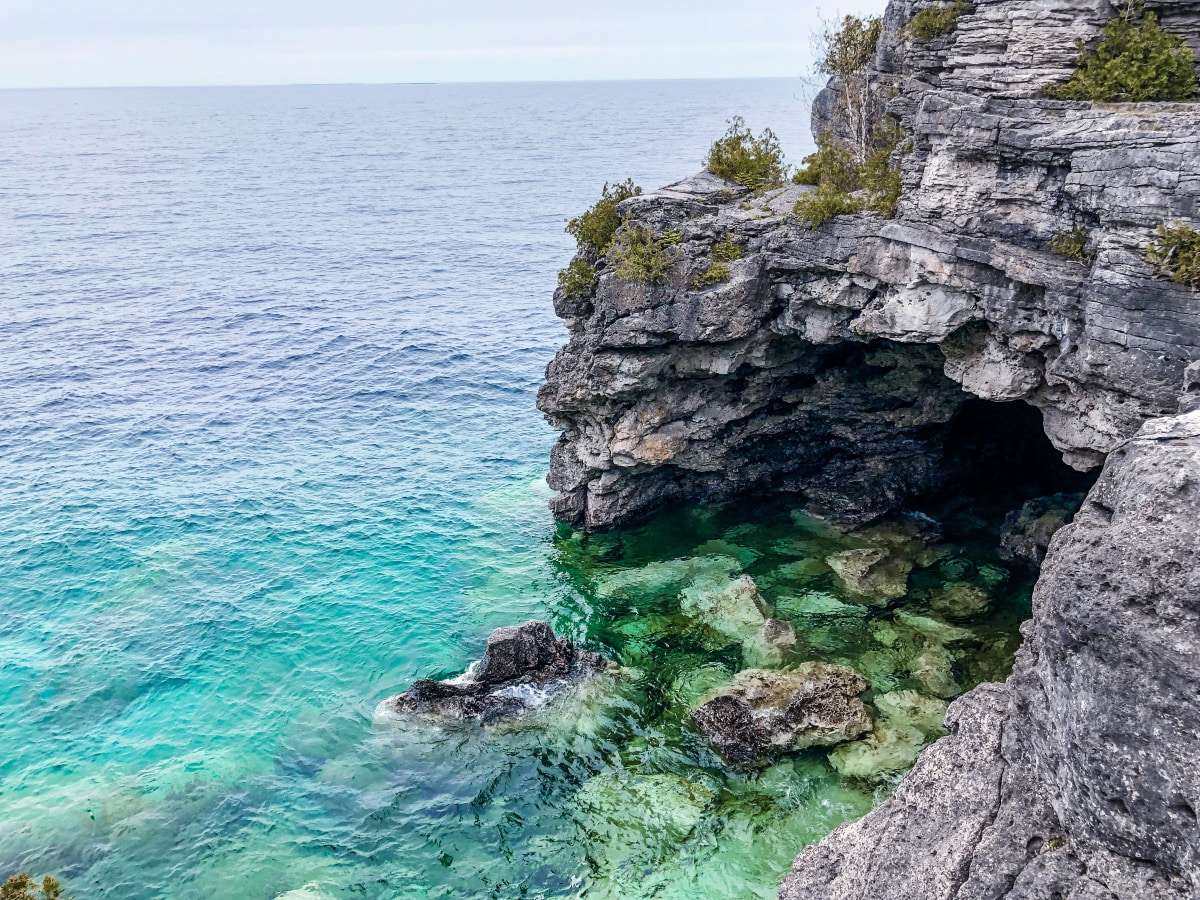 Many backpackers believe the Prairies are the longest segment of the great road trip across Canada, but that honour actually belongs to northern Ontario. It’s no surprise, it has even earned the nickname “Long-tario!”

Throughout most of your Canadian road trip, there are stretches of about six hours between each major city: from Vancouver to Calgary, then to Regina, and on to Winnipeg. But when you arrive in Ontario, that whole notion of distances changes: it’s three times as long! You’ll face 22 hours of driving from Winnipeg to Toronto! With this in mind, you can plan accordingly, because there are many beautiful places to discover in the Great Lakes region! Here’s one suggestion for your itinerary: 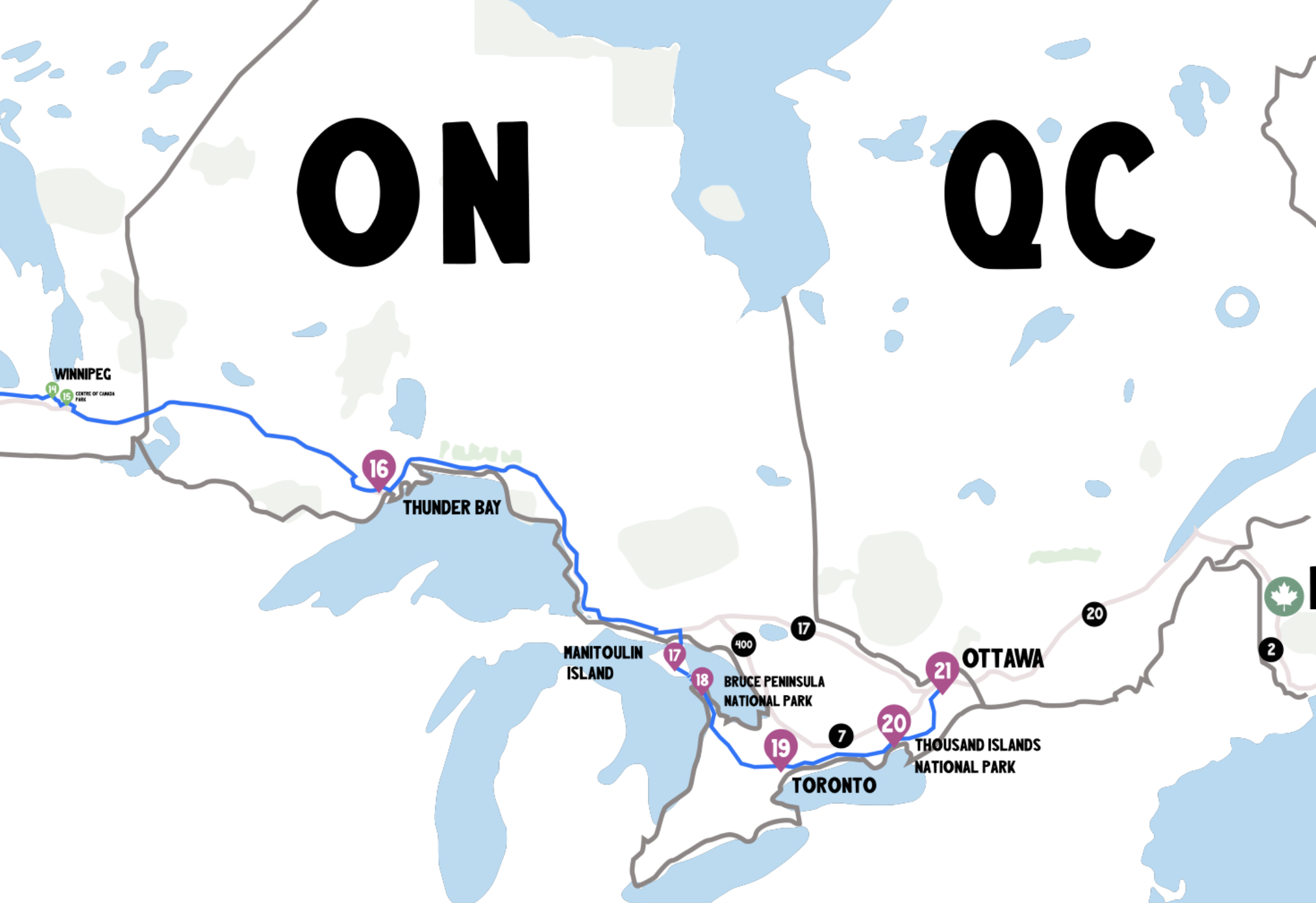 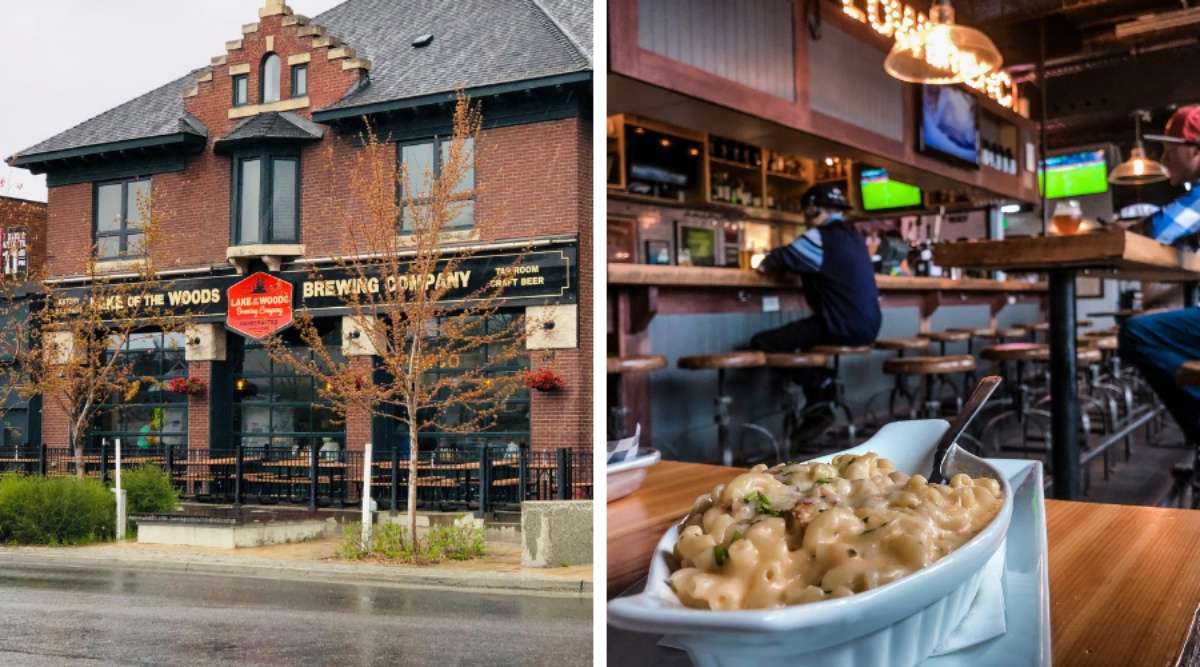 When you arrive from the Prairies, you can stop in this little city and get a feel for its holiday vibe. Take a break for a quick bite or a drink at Ontario’s northernmost microbrewery: Lake of the Woods. You won’t be disappointed with their macaroni and cheese!

Along the way, you’re going hug the north coast of Lake Superior, a splendid place on its own. If you’re camping, you can pitch a tent at Old Woman Bay and Pancake Bay. There is also a new hostel in Thunder Bay, The Haven Hostel, which is just great! 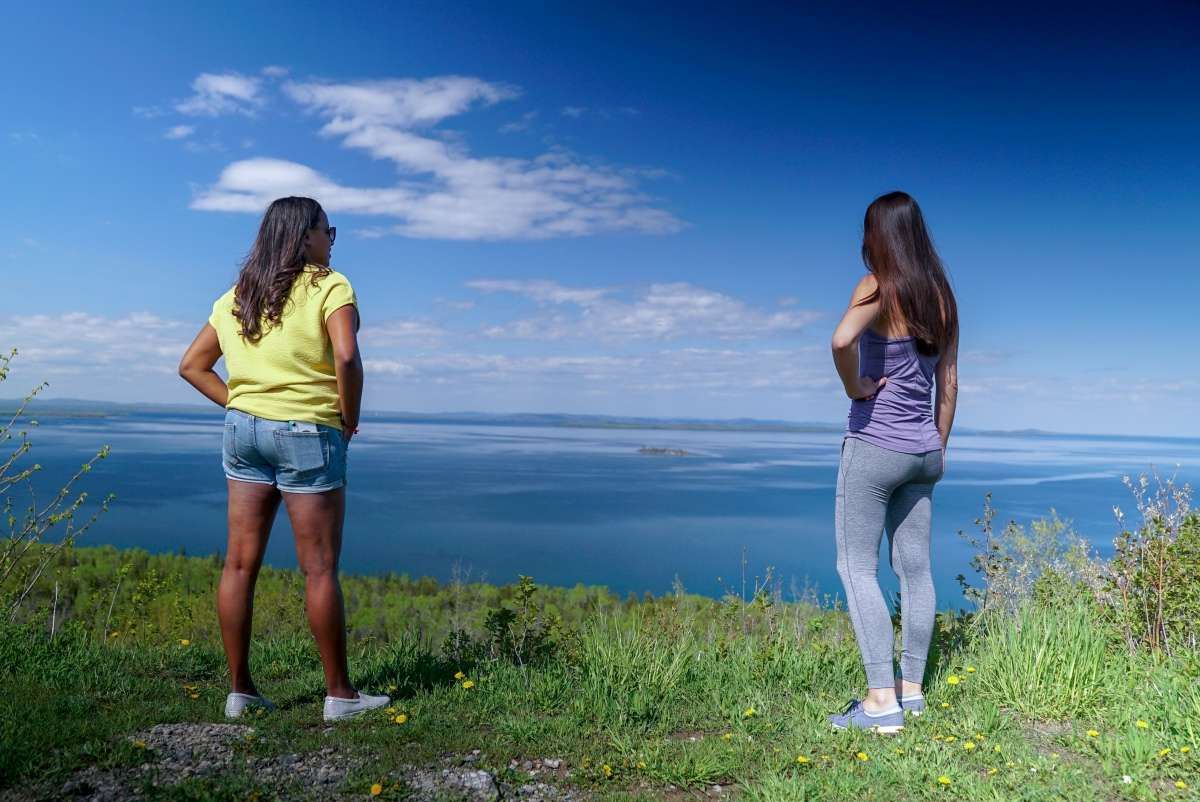 Rather than staying on the Trans-Canada Highway, take a worthwhile detour to Manitoulin Island, the largest freshwater island in the world! This island on Lake Huron has preserved a surprising natural and cultural heritage. Along with the Anishinaabe Native Americans and European colonies, the island was equally frequented by other groups. Archaeological discoveries in Sheguiandah have highlighted Paleo-Indian and archaic cultures that lived here between 10,000-2,000 BCE. 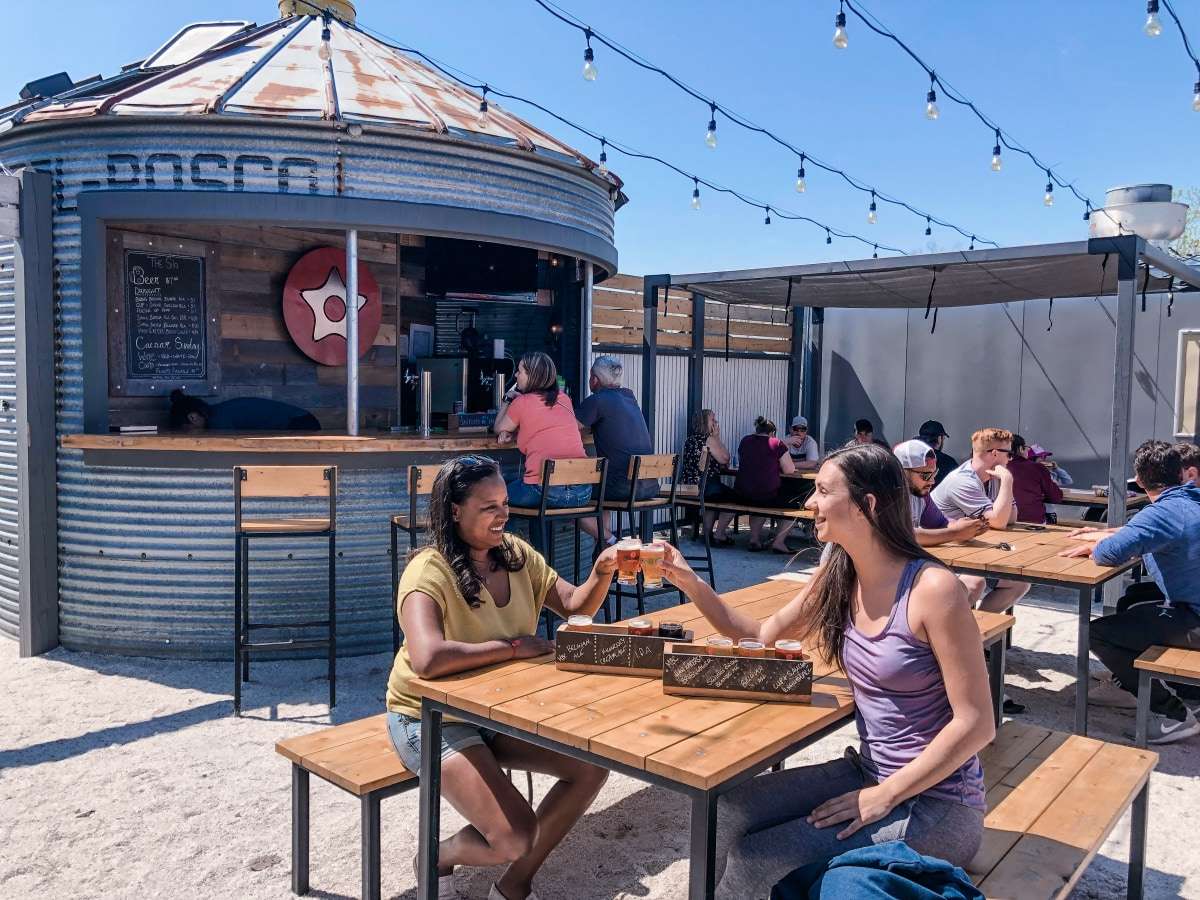 As soon as you set foot on this ancestral island, you’ll feel at ease. The philosophy of “Island Time” is omnipresent: the locals are smiling, and their good mood is contagious. Make a stop at the trendy Manitoulin Brewing Company for a beer “flight” — 4 beers for only $8. Make sure to stock up on cold ones for your stay on the island, because the neighbourhood grocery stores close early. Check out Ten Mile Point for stunning views of the surrounding area.

To chill on a beach at sunset, go to Providence Bay. There are also some amazing restaurants in the area, including Lake Huron Fish and Chips. To leave the island, book your passage on the iconic Chi-Cheemaun ferry on the Ontario Ferries website. 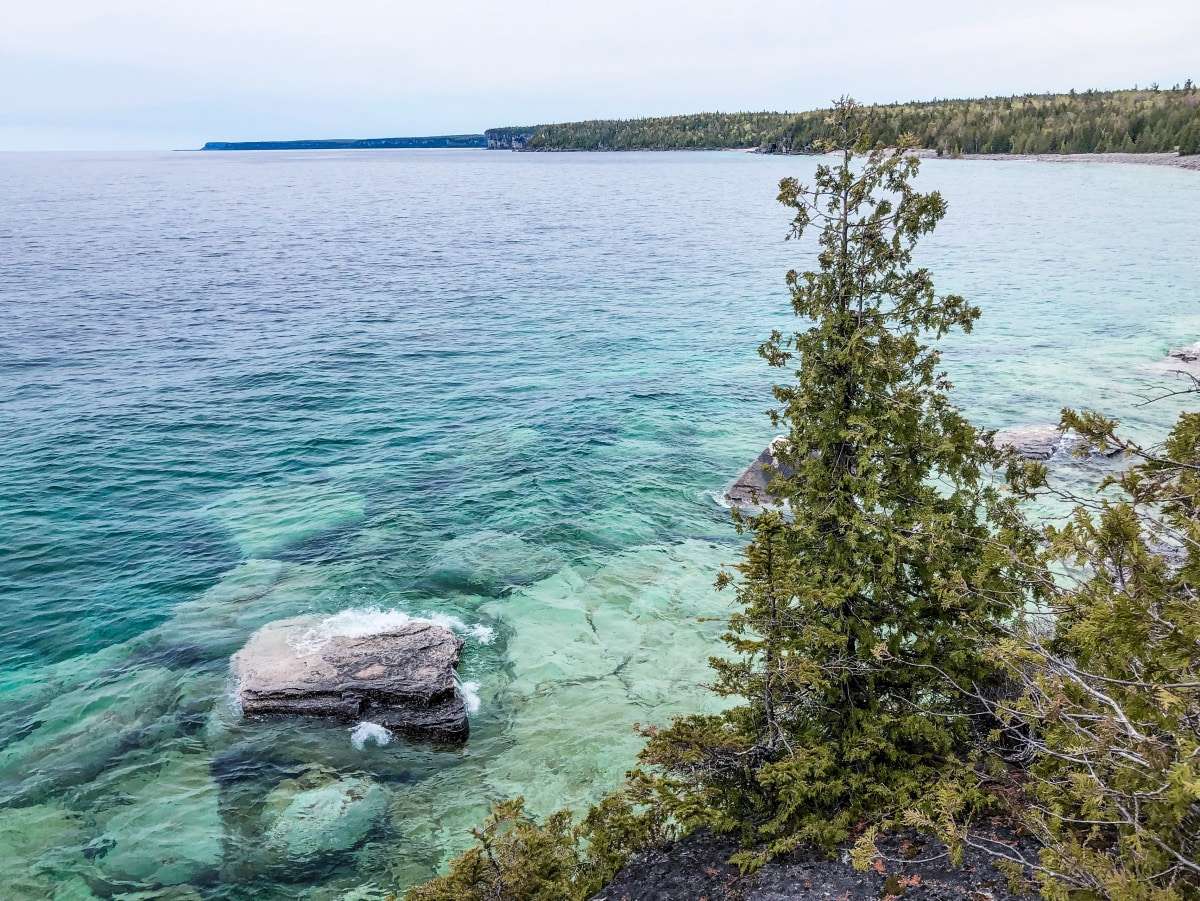 Prepare to fall in love with Bruce Peninsula National Park. The turquoise water looks like a postcard from the Caribbean! 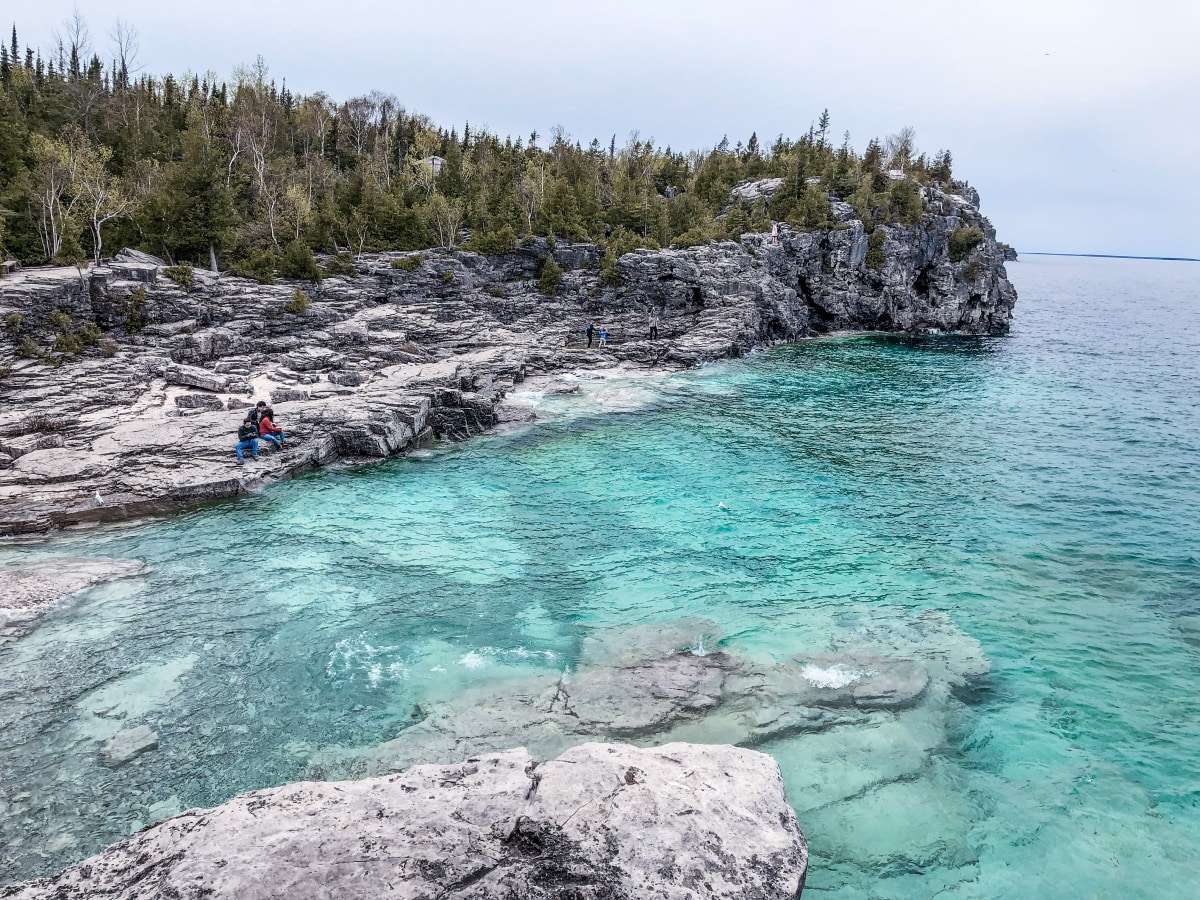 The diverse scenery makes this park one of Ontario’s most popular summer destinations. You’ll need to reserve your parking space (a 4-hour block) to get to Grotto, the highlight of the park!

Yes, there exists a way to descend into Grotto’s cave, but you’ll have to hold on tight to the edge. If you’re not too cold-natured, you can even swim there! To climb back out, you can also try going through the tunnel.

Continue your journey into Toronto, and you’ll come across a six-lane highway that will quickly remind you that this is Canada’s largest city. If you hadn’t run into much traffic heretofore during your trek, brace yourself! 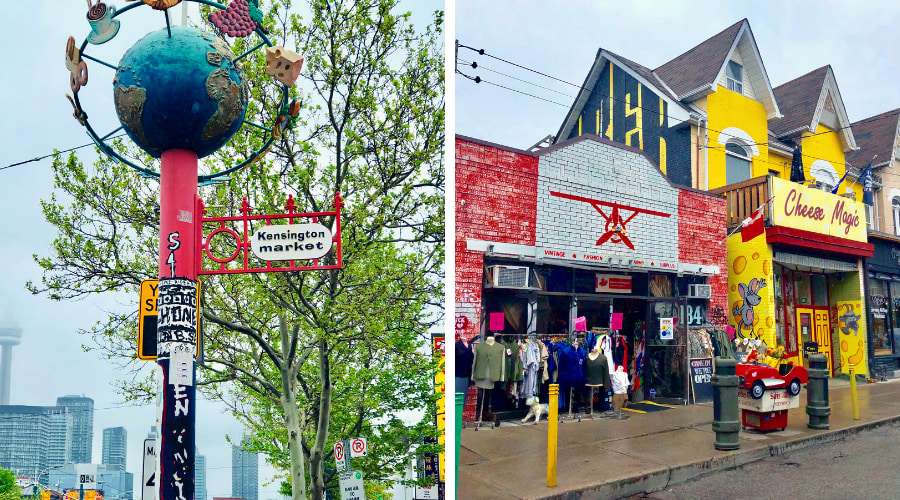 One must-see in Toronto is Kensington Market. At this most creative and alternative neighbourhood in the city, you’ll find vintage clothing stores, vinyl shops, international restaurants and many more interesting little boutiques. 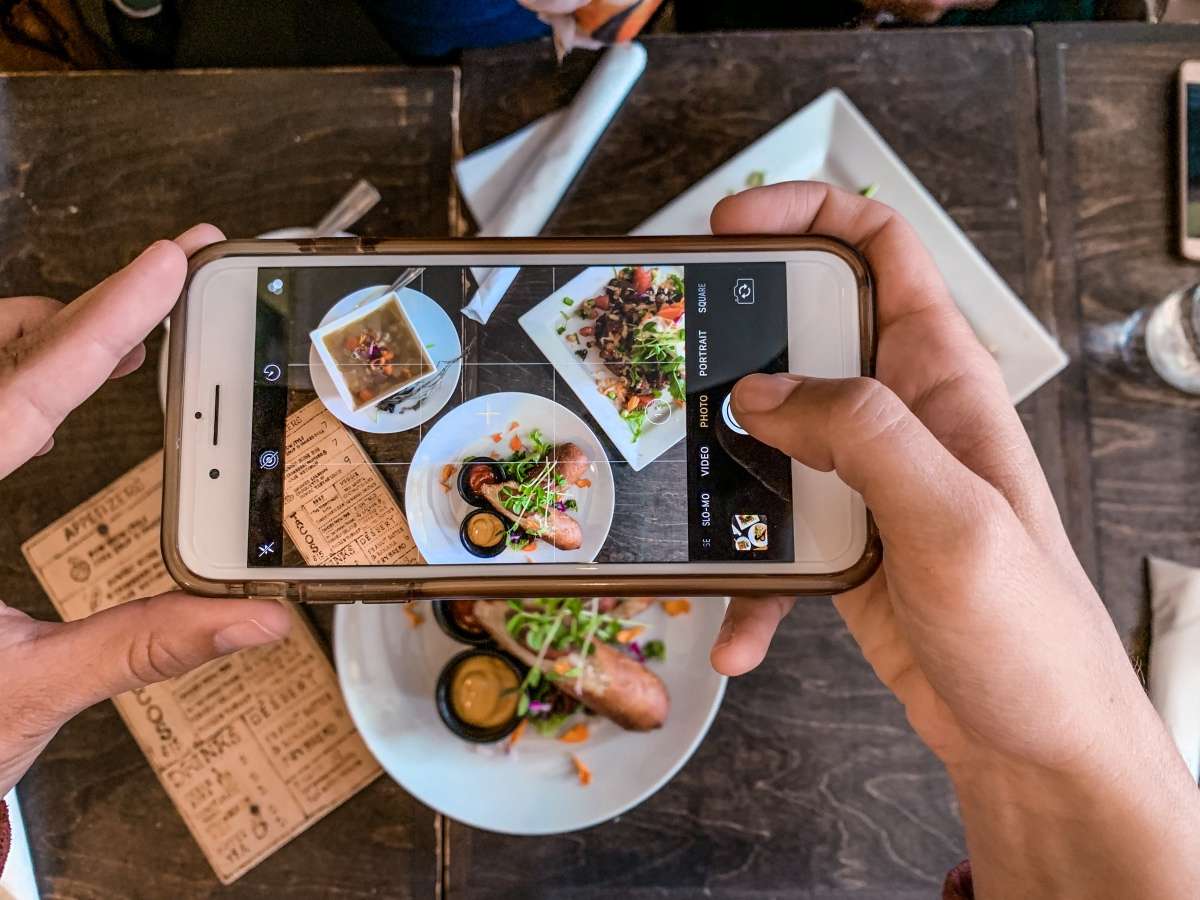 In fact, one of our faves was the Pow Wow Café, a restaurant offering a sort of reinvented Aboriginal cuisine (especially Pow-Wow) — an experience not to be missed. Try their jumbo scone dogs (a kind of Pogo) or famous Indian tacos with a side of corn soup. 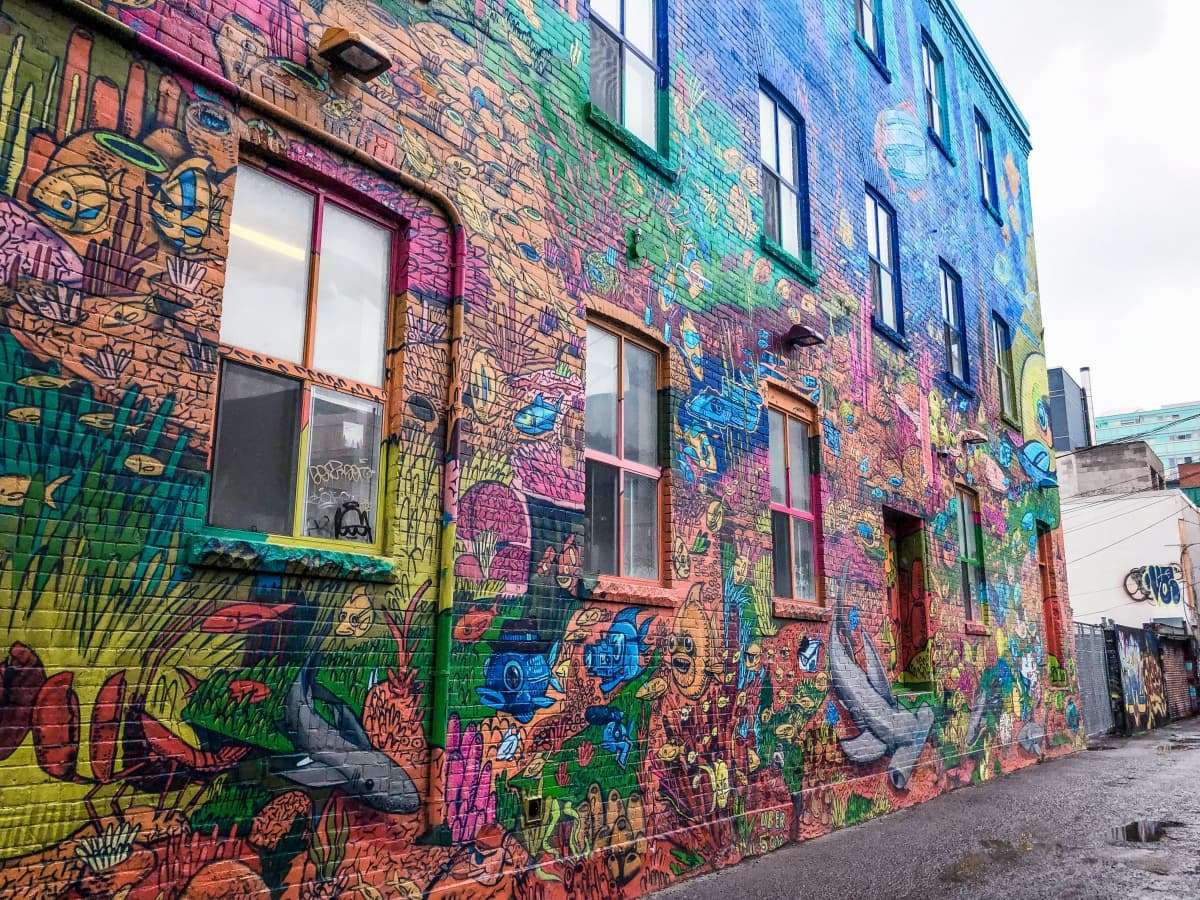 A stone’s throw from Kensington, check out the street art of Graffiti Alley. The multitude of colours and messages waiting to be deciphered will mesmerize you.

Where to Stay in Toronto? 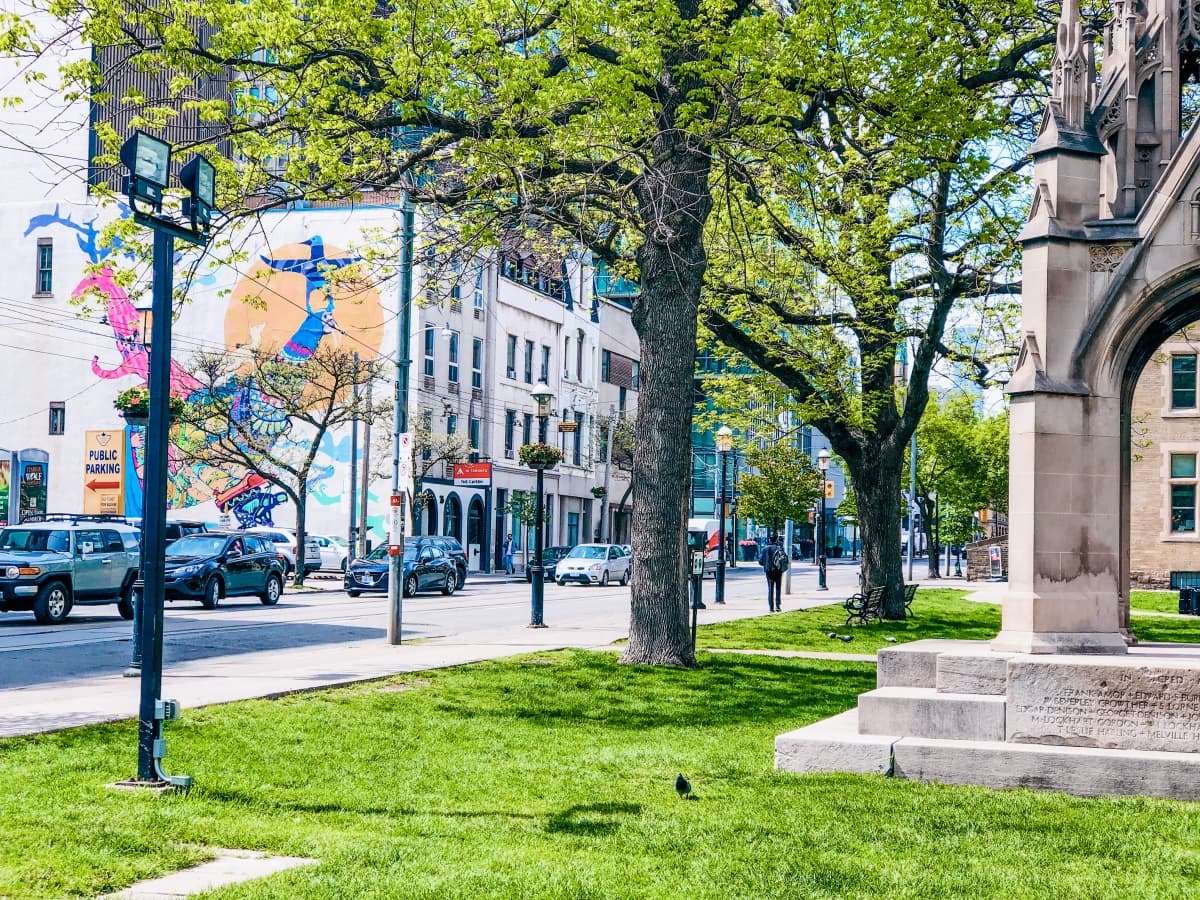 You can stay at HI Toronto, a hostel in the heart of downtown that hosts a variety of activities to explore the city properly. It’s so well situated that you can walk anywhere. Below, there’s also a bar called The Cavern where you can attend concerts, and that can serve as the starting point for your bar hopping tour! 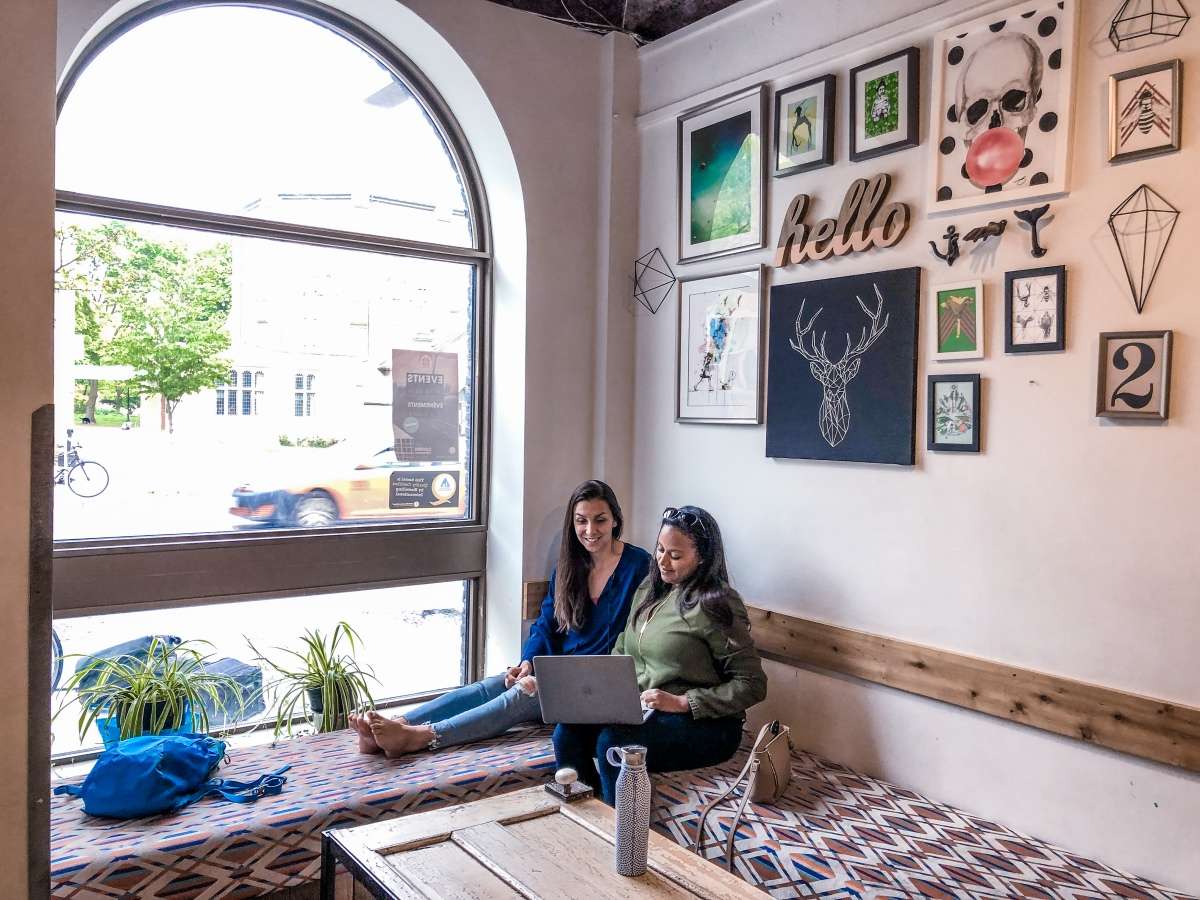 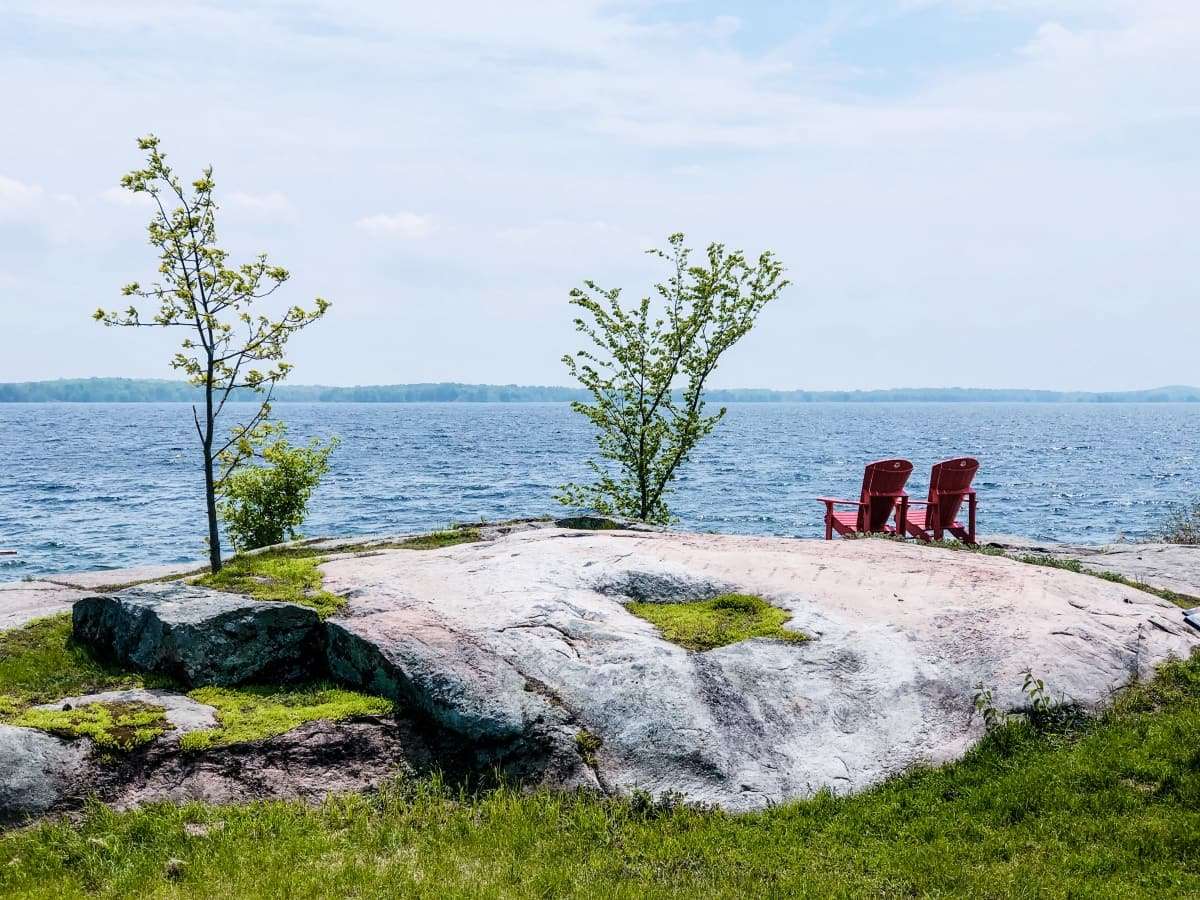 After getting back on the road to Ottawa, take a break and have a picnic in Thousand Islands National Park. If you have more time, you can also go venture into the water and explore the surrounding islands in a kayak or canoe. 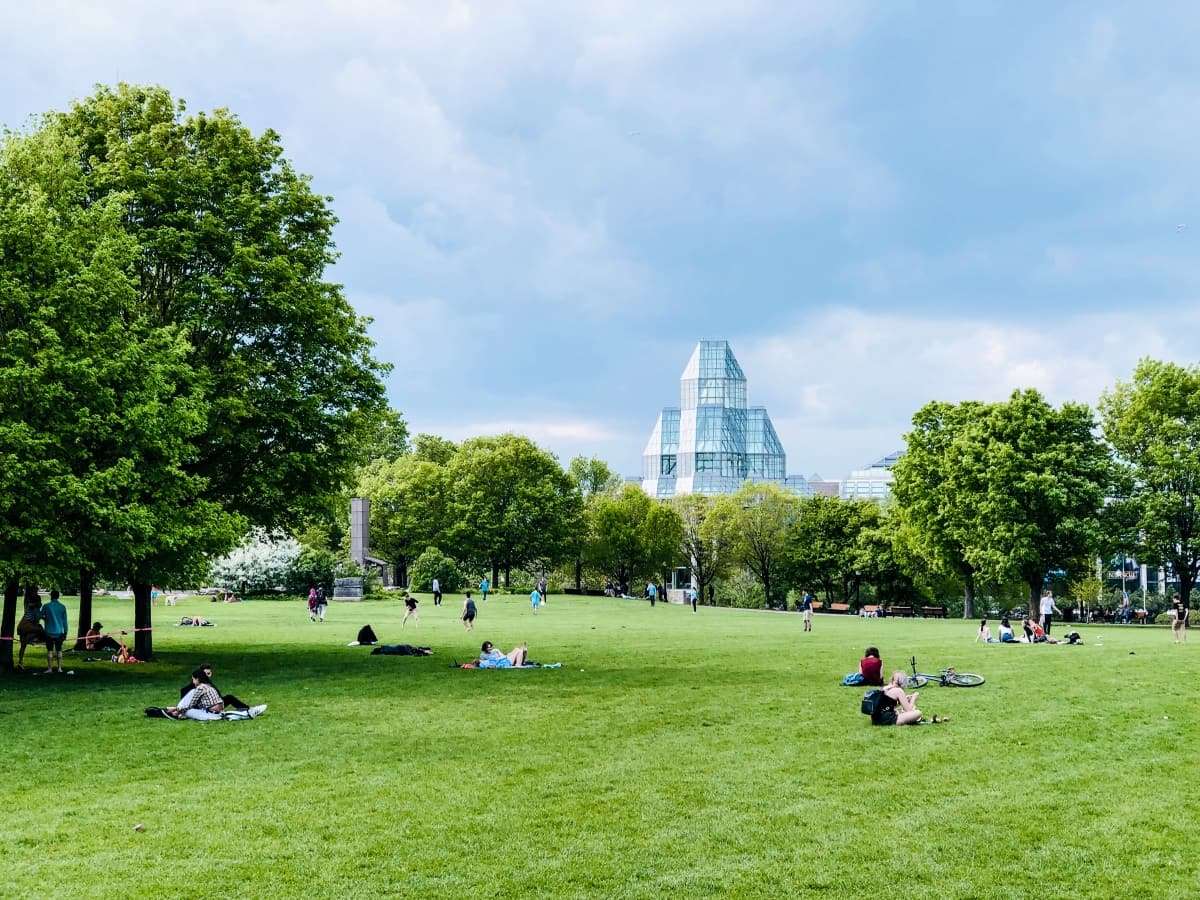 Once you arrive at last in Canada’s capital, you can go for a walk near the Rideau Canal, especially at Major’s Hill Park! If you’re visiting in May, take advantage of the tulip festival to admire a million of these colourful flowers! The Dutch royal family sends thousands of tulip bulbs to Canada each year. 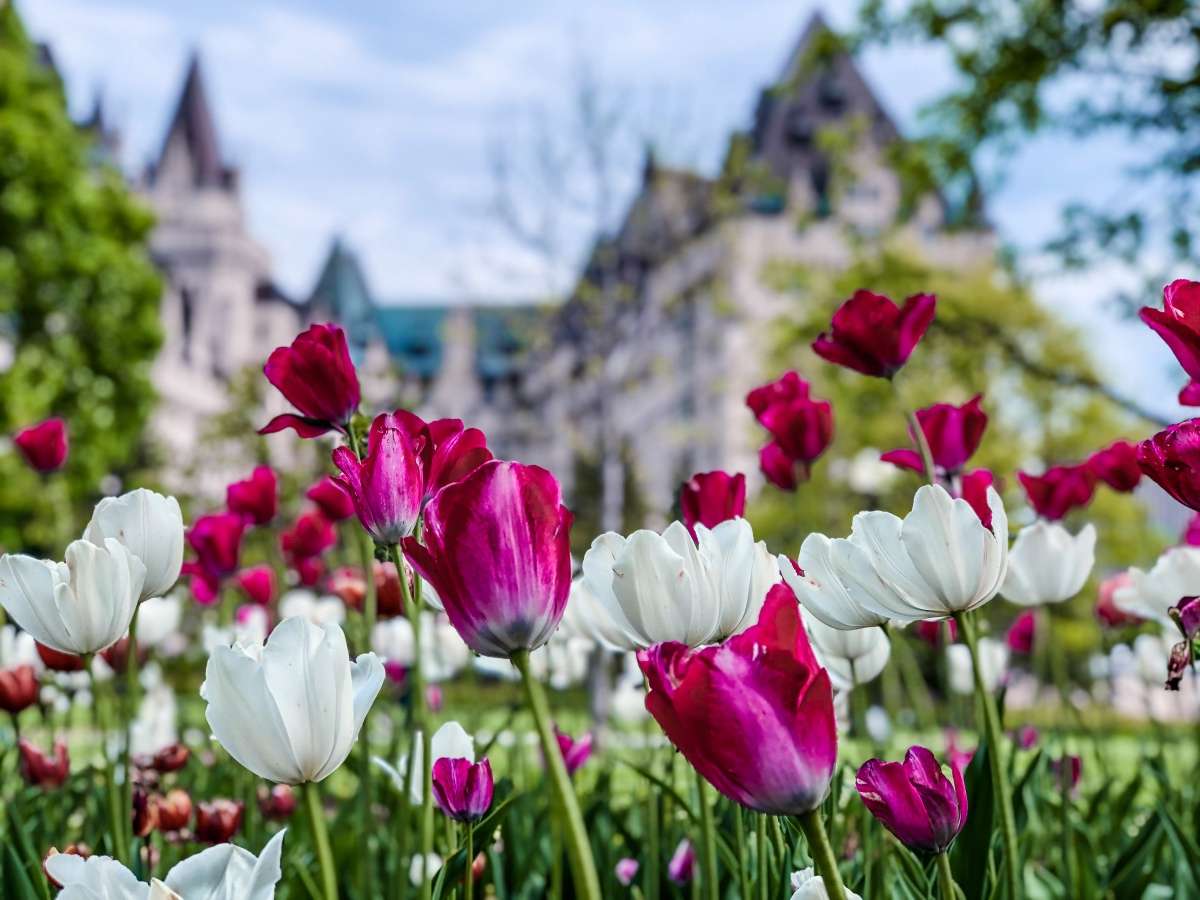 While you’re in the heart of the city, you can’t miss meandering through the Byward Market. Those on a tight budget will appreciate a drink at the classic Warehouse. 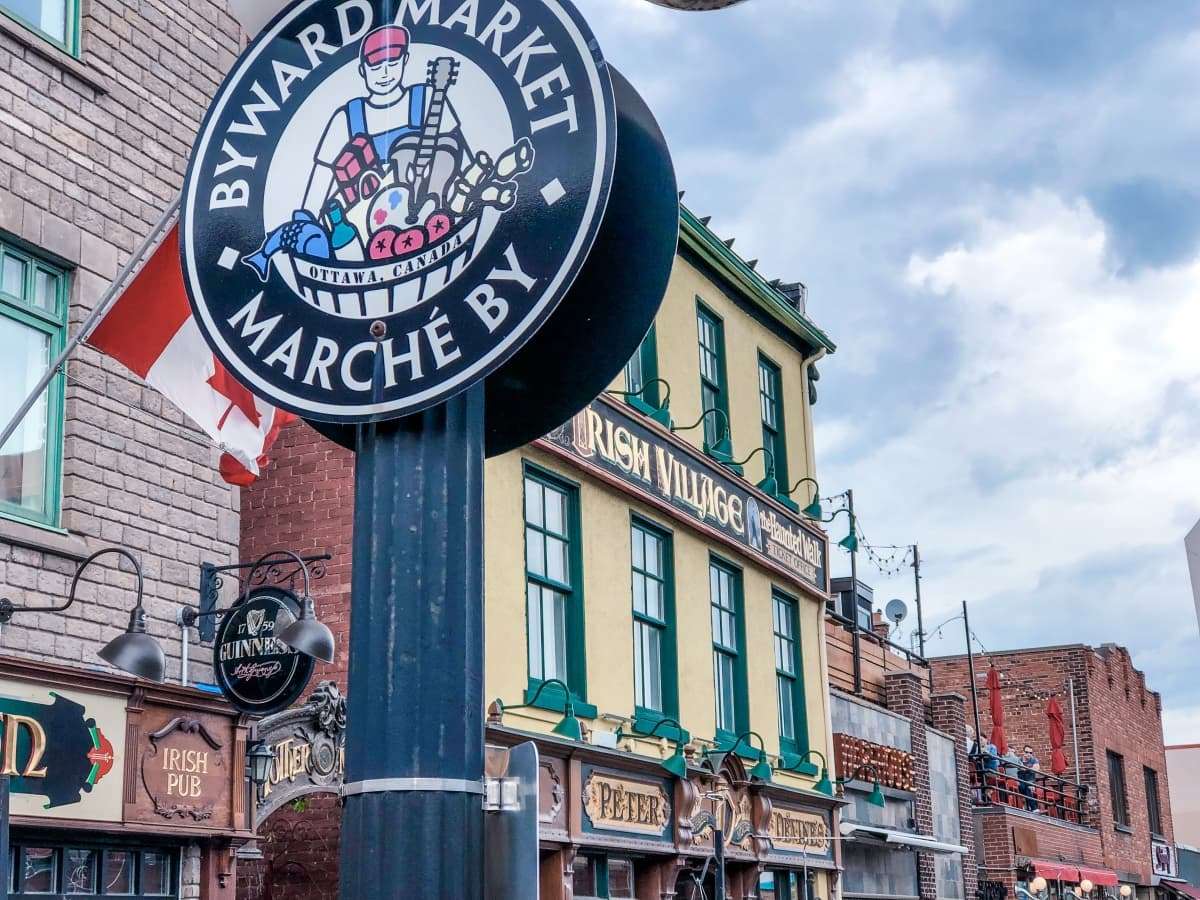 Where to Stay in Ottawa? 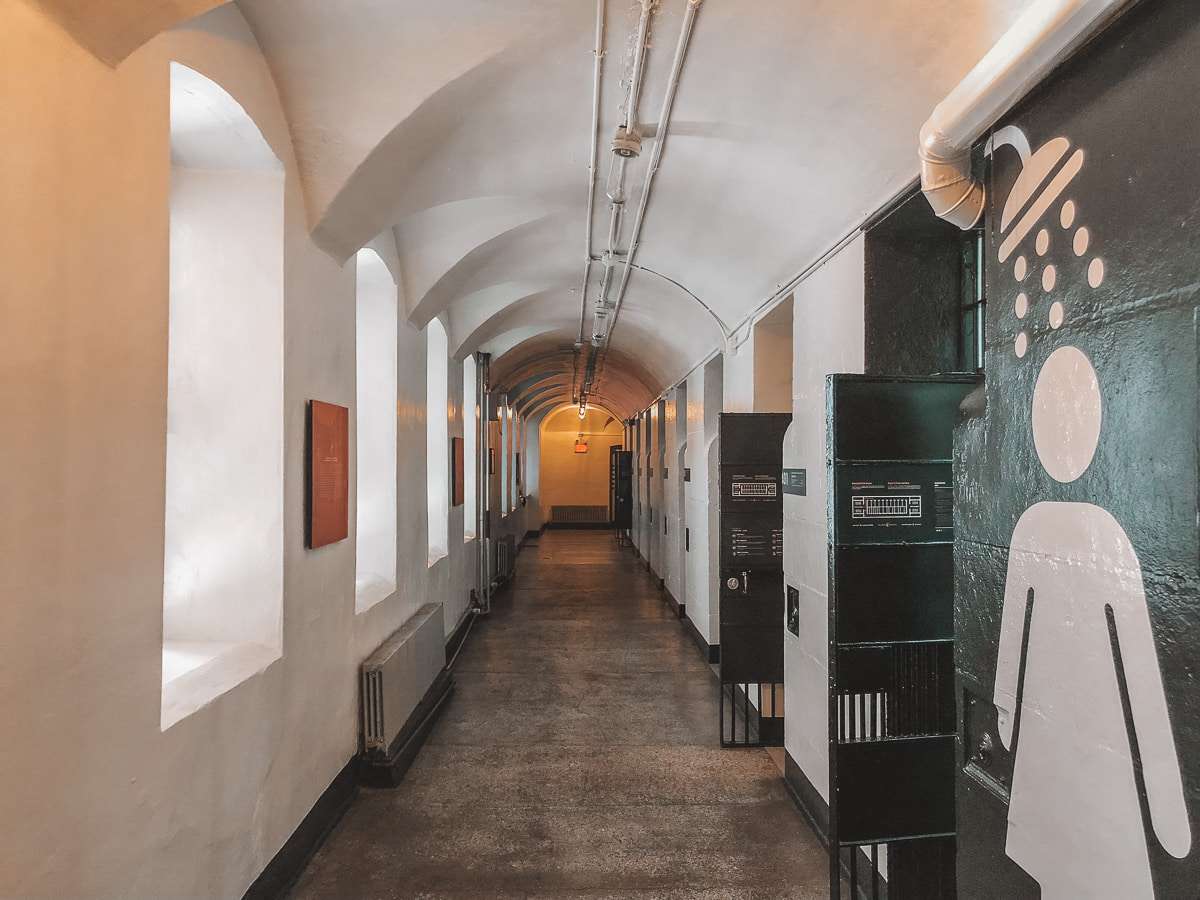 If you’re the type to love new experiences, you’re going to have something to tell your friends while staying at HI Ottawa Jail. You’ll be sleeping in an atypical hostel since this “jail” was a former prison now converted into a hostel. You can take a tour of the prison at 11 o’clock every day and discover lots of amazing things! Plus, you’re in the city centre, and you only have to walk two minutes to get to the Byward Market and all its restaurants and bars!

Ontario is definitely a province that has a multitude of magical places to discover. Don’t forget to preserve your patience… after all, it’s going to take you 22 hours to drive from one end to the other!

So, what are your favourite secret spots in Ontario?

How Do I Get a Working Holiday Visa for Portugal?