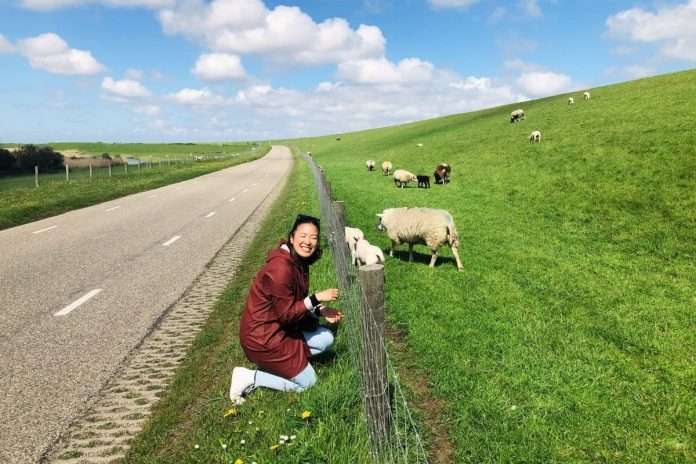 Have you ever dreamed of living in Amsterdam, embracing life to the fullest like the Dutch? Imagine yourself biking along the canals, basking in the art, food and culture of the Netherlands. If this sounds like you, you might be interested in applying for a Working Holiday Visa in the Netherlands. Fellow Canadian Steph Truong explains how a Toronto girl ended up living and working in Rotterdam for a year.

What made you apply for a Working Holiday Visa in the Netherlands?

“It’s kind of funny, actually. I was dating someone with EU citizenship interested in studying overseas, and he asked me to join him. This seemed like the perfect excuse to go. I found out about a Working Holiday Visa available for Canadians my age, so I thought, why not? It was too good of an opportunity to pass up.”

How did your family and friends react to your decision to work and travel in the Netherlands?

“They were pretty supportive and encouraging. At first, my parents were slightly apprehensive because they moved to Canada from China and Vietnam to give my brother and me a better life. Me wanting to leave this idyllic paradise of a country was super shocking to them. But in the end, they came around and were excited about my new adventure. My friends were obviously thrilled because now they would have somewhere to stay in the Netherlands. And (hopefully) a little bit sad because I was leaving. A lot of mixed feelings for sure.”

How did you apply and prepare for a Working Holiday Visa in the Netherlands?

“The WHV is pretty simple to prepare for and get because it’s open to such a wide age range of Canadians. I like to be prepared, and the whole overseas thing was a bit intimidating, so I called the immigration office in the Netherlands a couple of times before going. I asked what kind of paperwork I needed, what documentation I had to bring, and if I could complete the application in Canada before I arrived. The lady I spoke to was super friendly, and she reassured me that I could just show up. Canadians have the 90-day tourist exception, so you can stay there for up to three months before applying.

I went to the immigration office during my first week in the Netherlands, and I handed in my paperwork along with my birth certificate, passport and proof of funds to fly back home. Then I got a sticker in my passport and had to wait a week to pick up my resident’s permit for the year. It was pretty pain-free.”

Was it challenging to find a job with a Working Holiday Visa?

“The job search environment was the same as any other. There’s a lot of workers applying. But thankfully, in this digital world, there’s a lot of opportunities. It took me two to three months to find a job in my sector. I’m a designer illustrator, so I did some freelance projects for local clients and some clients I had back in Toronto. After multiple interviews, I got a job with a tech company, and I worked there for a year.

Some companies are apprehensive about hiring people with a Working Holiday Visa because they leave after a year. Luckily, my company was on a list of recognized sponsors that can give workers a Knowledge Migrant visa, which allowed me to stay in the country indefinitely, as long as I was employed there.”

Are there any specific websites you recommend visiting to narrow your job search?

“Four years ago, I used Indeed. More recently, a job recruiter found me on LinkedIn after changing my location to Rotterdam, where I was living. It’s a good idea to keep your LinkedIn profile current and update your location. This is a great way of attracting more recruiters from that area.”

Is it possible to find work in the Netherlands if you don’t speak Dutch or are still learning?

“It largely depends on the type of work you’re in as almost everyone speaks English. I didn’t know any Dutch, but I tried to learn while living there. While learning the language may not be an enormous asset to your job, since many companies are international, it will help you socially. My Dutch wasn’t great, but my friends liked that I made an effort and tried to integrate. I started meeting more people, and being able to make small talk in Dutch expanded my social circle.”

What are the main differences between living in the Netherlands versus living in Canada?

“Both places are pretty comfortable to live in. The Netherlands is a very multicultural and vibrant country. You meet people from so many different countries, nationalities, walks of life, more so than in Canada. It was a bit jarring at first, learning to understand Dutch street signs. Going to the grocery store and seeing different vegetables and packaging and eggs not in the fridge was weird. And I missed being able to make small talk. Now that I’m back, I’ve been chatting to everyone, which is maybe a little annoying.

Another thing to note is everyone cycles everywhere in the Netherlands. Be mindful that you can’t just lock your bike anywhere. You’ll notice signs that say “Niet Fietsen,” which mean “no bikes.” I learned this the hard way. I locked my bike up near the train station during my first week, which is a big no-no. When I came back from my interview, my bike was gone! It turns out the Netherlands has something like the bike police who drive around in huge trucks, and if they spot a bike locked in the wrong spot, they put a sticker on it. You have maybe thirty minutes to collect your bike. Then they post a bike mugshot on a website. I had to pay to get my bike back twice.”

Where did you travel in the Netherlands during your Working Holiday Visa?

“Travelling was by far the best part. Towards the end of my trip (because I first got there at the beginning of the pandemic), I got to see a lot of the Netherlands. I went to some of the islands, all the little villages surrounding Rotterdam and the major cities that make up the Randstad.

In addition, I tried to take advantage of how easy it was to get to other countries. You can take a train, bus, rent a car, short flight and you’re in Spain, France, Slovenia… I tried to go somewhere every month.”

Do you have any tips and tricks to travel cheap?

“It’s a good idea to check the train website, where they’ll show you the schedule and prices for a few months into the future. That way you can see the fare trends and know which days of the week are cheaper. Also, you can sign up for local flight watchlists by subscribing to emails that give you access to weekly or monthly promotions for cheap flights to popular European destinations. Or you can stalk Google flights.”

What would you say to someone hesitant about doing a Working Holiday Visa in the Netherlands?

“Go, without a doubt! If anyone feels nervous or apprehensive about trying it, I would advise them to lean into that feeling. It’s nerve-wracking for a reason.

This has been so much more than just a fun experience in a new country. I’ve made life-long friends and learned a lot about myself.

I’ve also had the opportunity to work in another culture and understand their traditions and quirks. I was able to see other countries with ease.  It was a very meaningful experience for me.”

There’s a whole world to discover if you’re willing to go outside your comfort zone and take a chance on someplace new!

If you are a Canadian between the ages of 18 and 35 and you want to travel and work abroad after the pandemic, you’ll find all the details on how to apply for every country, including the Netherlands, on the International Experience Canada website.

The NomadTALKS are proudly presented by International Experience Canada (a Government of Canada program).

▶ ️ For even more inspiration, listen to our #NomadTALKS series on YouTube, where we talk with other Canadians who have travelled and worked abroad.

The original interview was conducted by Safia Dodard and compiled by Britney Claveau. The interview has been edited for length and clarity.

Britney Claveau
I love take-offs and I'm a fan of any destination near water or the mountains. My favourite trips have been road trips: inhaling fresh air through the Canadian Rockies and sipping tea along the grassy switchback alps of Switzerland on route to fairy tale castles in Germany. I'm not a light packer, but I'm slowly working on my technique. Right now I live out my travel dreams vicariously through writing about them.
RELATED ARTICLES
Netherlands

Top-Rated Most Instagrammable Hostels in the World

5 Reasons Why Rotterdam is THE City to Visit

The Secret Trick to Using Your Canadian Credit Card at a U.S. Gas Pump

What to Do if You Test Positive While Travelling Abroad?